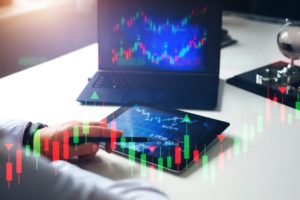 Inflation does not deter markets

The consumer price index just won’t stop moving. Analysts had forecast January’s figure of 9.1% to be inexorable, but it has now been beaten to 9.7%. This cold shower relating to inflation does not seem to have worried the markets much.

The effect of the Russia-Ukraine crisis

The news did not go unnoticed and the Fed is heading for a 50-point (0.50) correction in March, but the mood is high in the Nasdaq and S&P 500 thanks to news from the East.

The Kremlin, in fact, through its defence minister, has announced that the forces deployed in the southern and western military districts mobilized for war exercises on the border with Kiev are returning to their bases.

The news came as a breath of fresh air and the Dow Jones immediately took advantage of it to recover 300 points to just under 35,000 points while the S&P 500 gained 1.15 and the Nasdaq reached 14,000 points.

US futures also enjoyed the news as they expected the two superpowers (Russia and the US) to settle their differences over Ukraine, which is on Europe’s doorstep.

The price of oil fell by around 4% in the Big Apple and Nasdaq’s big tech companies were buying heavily in this climate of serenity, including Tesla and Netflix.

Ryan Detrick of LPL Financial suggested in an interview with CNBC that the combination of the easing of the possibility of war in Ukraine, which could have a global reach, together with the news of an 80% drop in the number of Covid cases in the US since the peak in January, had caused markets to turn green in the belief that the policy of reopening the economy will continue and that consumption will also help the already battered economy.

Even in Russia, markets were positive following Lavrov’s (Moscow’s defence minister) statements, with the VanEck ETF, an American fund investing in the shares of Russia’s most highly capitalized companies, gaining as much as 5%.

The retreat of the Russian forces does not seem so certain. It is feared to be a strategy for a future invasion, a sort of surprise effect. Only time will tell if this is the case. In the meantime, the markets have benefited from the good news.

In short, the bad news on inflation has not yet had the better of the situation and this has kept the markets up.

Looking to the future, we should keep an eye on core inflation, i.e. the basket without food and energy, which stands at 8.3% on an annual basis, as it is held in high regard by economists because it avoids the effect of volatility, as well as the value without food, energy and commercial services, which reaches 6.9% on an annual basis.

The bottom line is not to lose control, investors must remain as calm as possible. The next appointment has been set by the US central bank for March, when it will begin an aggressive policy against the sacred monster of inflation, but in the meantime, it was a priority to avert war between the two major nuclear powers for the good of all, and of course the markets.

The post Inflation does not deter markets appeared first on cryptodailynews24.com.