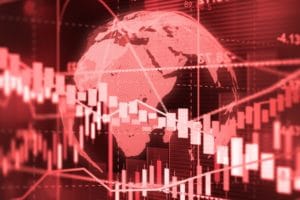 With the weekend that has just ended, the black week of the stock exchanges has come to an end, but what led to a trasversal collapse of the stock market? Let’s see it together.

The reasons for the stock market crash

The Fed has communicated the value of the Consumer Price Index, or the average increase in prices of a basket of goods and services of large-scale and daily consumption established by the BLS (Bureau of Labor Statistics) compared to the same period of the previous year; in essence, the CPI is what we commonly call inflation.

The figure released last week alarmed and disconcerted the markets as it differed from the forecasts that gave a maximum of 7% and were widely exceeded with an unexpected 7.5%.

This data created the perfect conditions for a real flight from Nasdaq and S&P 500 stocks in favor of the bond market and refuge goods.

Raw materials on the rise

Also, due to the winds of war in Eastern Europe, which may take on a global dimension at least for its strategic importance and for what is at stake, the price of raw materials has skyrocketed: gas, electricity, and oil above all have grown to exorbitant levels, and Brent is even expected to exceed 100 with a target of 150 according to some analysts.

Gold and Bitcoin in countertrend

Commodities, however, are not the only ones to have been galvanized by this conjuncture of geopolitics and finance. Gold and Bitcoin have also sounded the charge.

The yellow metal seen by many as a safe haven asset par excellence is almost at its highest level since last year at around 1800 dollars per gram, even though with a wide fluctuation in terms of volatility.

Very good also the virtual currency: BTC, that in the last week had also touched 40.000 dollars and then fell to 38.000, on Friday that proved to be an excellent asset in terms of safe haven. When the whole American stock market collapsed, Bitcoin, in countertendency, recovered ground, returning just under 38.500 dollars. This positive deviation from what the market was showing, combined with the fact that the virtual currency is at the levels of mid-January, gives hope to the analysts of the main players who see a possible target of 50,000 dollars for the cryptocurrency by June.

The Fed and inflation

Today, an extraordinary Fed meeting is scheduled to put a brake on the CPI and thus refresh Nasdaq, S&P 500, and investors.

Goldman Sachs sees a likely increase of 1.75 basis points by the end of the year, to be carried out in 7 steps, the first of which in March could already be 0.50. The American Stock Exchange, and above all its investors, are following with eager anticipation the measures that the central bank will adopt after the thud following the inflation data, which on Friday left 2.78% on the field.

At today’s meeting, rumors say that quantitative easing may be halted and the file on rates postponed to March. We will see.