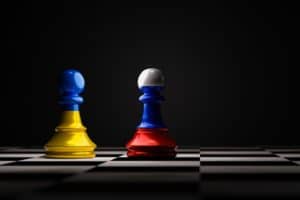 Russia-Ukraine tension, the risks of a cyberwar

The tension between Russia and Ukraine is always sky-high, but this time a physical war could be flanked or replaced by a cyberwar.

The risk has been feared by the European Central Bank, as reported by Reuters. But a similar warning would have also arrived from the Department of Financial Services of New York.

The fear is that, in case of an invasion of Ukraine and retaliation by Europe and the United States, Russia could start cyberattacks directed to the US and the EU banks.

For this reason, the banks would be making tests to verify their security and the capacity to resist external threats.

That the hypothesis of cyberwar is concrete is shown by the precedents. At the beginning of January, Ukrainian government sites were hit by a violent cyber attack. According to the Minister for Digital Transformation in Kyiv, Russia was behind this attack, as some evidence would confirm. Accusations rejected by Moscow.

The attack affected 70 government sites, which before going offline carried a warning message that sounded more or less like this: “Prepare for the worst.”

And while European institutions are struggling to build up walls made of cyber security, the United States says they are ready to give all their support, with Russia officially replying that the West is suffering from “Russophobia.” If it was an attempt to tone it down, it definitely fell on deaf ears.

Russia and Ukraine risk a cyberwar

War at any time

That tensions are growing, not to say explosive, is also demonstrated by the recent words of US Secretary of State Antony Blinken. During a visit to Australia, Executive Biden declared that a war could break out at any time.

These are his words:

“Simply put, we continue to see very troubling signs of Russian escalation, including new forces arriving at the Ukrainian border. As we’ve said before, we’re in a window when an invasion could begin at any time, and to be clear, that includes during the Olympics.”

Indeed, the Beijing Winter Olympics are underway. Historically, during the time of the games, even wars stop. That has been the case since ancient times, and who knows if this tradition will be respected this time around.

The role of cryptocurrencies

The challenge between Russia and Ukraine also passes through cryptocurrencies. It is no mystery that several Ukrainian NGOs, paramilitary and cyber organizations are financing themselves precisely by collecting cryptocurrencies. That was recently revealed by Elliptic, according to which donations have increased by 900% and resulted in raising $500,000 in 2021 alone. It’s easy to assume that the trend certainly hasn’t stopped in these early months of 2022.

And while Ukraine dreams of becoming a new hub for cryptocurrencies, ad hoc regulation is on the way in Russia that won’t ban them, quite the opposite. After all, President Putin has guessed that the way to depower the US dollar also passes through cryptocurrencies, which is why Russia is also well disposed towards mining activities, heedless of energy problems or issues of monetary sovereignty that have pushed China to ban Bitcoin.

A possible war would also be the first test for cryptocurrencies, which have never witnessed such serious geopolitical events. Bitcoin will be tasked with holding its own against investor fears and censorship risks that could come from all sides.

The post Russia-Ukraine tension, the risks of a cyberwar appeared first on cryptodailynews24.com.