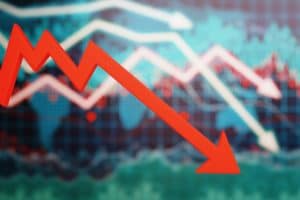 The tensions between Russia and Ukraine are conditioning the market’s trend. Yesterday was a day to forget, with most of the world’s lists in negative territory.

Piazza Affari, for example, has lost about 4%, and the non-election of the President of the Italian Republic at the first ballot has nothing to do with the earthquake on the stock exchange.

On Italy weigh the “preoccupations” about the election of the President of the Republic in progress. The markets would like the authority of Mario Draghi in the Quirinal, but Draghi is also the current Italian Prime Minister; therefore, his election would also lead to a government crisis.

In any case, it is unlikely that the Italian parliament will come to an agreement today.

Fears that the FED might raise interest rates are also weighing heavily. Indeed, that they will be raised is now certain, but tomorrow will be the day of truth to understand the extent of the FED’s decision.

The economic situation in the United States is part of an international crisis that could cause a perfect storm on the markets. Yes, because the risk of increasing tension between Ukraine and Russia and possible interference from the European Union and the United States is that Russia will turn off the gas taps. That would send gas prices soaring and cause an unprecedented energy crisis in Europe.

Tensions on the border between Russia and Ukraine

Russia-Ukraine, what is happening

It all started with the news that Russia was waiting for a pretext to attack Ukraine and potentially annex it. It would be a repeat of what happened with Crimea in 2014. Russia would basically claim that the Russian-speaking population of Ukraine would be in danger, particularly in the pro-Russian and separatist Donbas region. Another bone of contention would be Ukraine’s entry into NATO. Having a neighboring country in NATO would mean for President Putin to find adverse military positions at his doorstep. A risk that Moscow absolutely does not want to afford.

The tension rises, as demonstrated by the deployment of 100,000 Russian troops with tanks and heavy artillery on the border with Ukraine. The Ukrainians, on their part, are preparing themselves, counting on their forces, since Europe and the United States are trying the card of diplomacy (and sending weapons to Kyiv), but they would hardly take a leading position in a possible conflict.

And while some claim it’s all a bluff by Putin, the question remains as to how a 21st Century war in Europe might play out. It could just be a cyberwar, with no casualties but lots of inconveniences, but that doesn’t sit well with the presence of heavy artillery massed at the borders.

The hope is that Putin is truly bluffing and that diplomacy will do its job without creating further economic tensions in a world still tested by Covid.