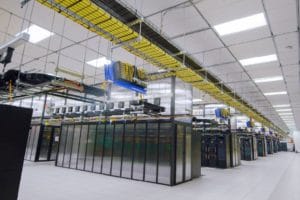 Meta, the new name of Facebook, which is increasingly oriented towards the development of the virtual reality of the metaverse, announced in recent days the upcoming creation of an Artificial Intelligence (AI) supercomputer deemed as the fastest in the world.

The AI supercomputer of Meta

“Meta has developed what we believe is the world’s fastest AI supercomputer. We’re calling it RSC for AI Research SuperCluster”.

“We hope RSC will help us build entirely new AI systems that can, for example, power real-time voice translations to large groups of people, each speaking a different language, so they can seamlessly collaborate on a research project or play an AR game together”.

The war of AI computers

The RSC computer currently has, as the company claims, 760 Nvidia DGX A100 systems with a total of 6,080 GPUs. This would already be one of the fastest AI computers in the world, but when it is completed by the end of the year, it will certainly be the fastest on the planet.

AI computers seem to have been the subject of intense competition between Silicon Valley companies for some time now. Microsoft and Nvidia have recently announced the realization of their very powerful computers, but this one from Meta seems to be definitely superior in terms of execution speed. This is probably precisely to develop the virtual reality sector of the metaverse that Zuckerberg’s company seems to be focusing on with increasing conviction.

“We expect such a step function change in compute capability to enable us not only to create more accurate AI models for our existing services, but also to enable completely new user experiences, especially in the metaverse”.

Zuckerberg himself recently disclosed that he plans to hire at least 10,000 new workers over the next five years to be dedicated in full to developing projects in the metaverse.

Meta studies a project for artificial intelligence in the Metaverse

Work on the new RSC supercomputer began about a year and a half ago and is expected to be completed by probably August 2022 or at the latest by the end of the year.

According to the company’s predictions when completed, the computer will have 16,000 total GPUs (for comparison, Microsoft’s should contain 10,000) and will be able to kick off artificial intelligence systems “with more than a trillion parameters on exabyte-sized datasets”.