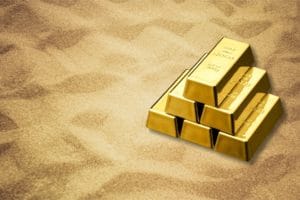 Gold down, but remains a safe haven asset

In a period of high volatility of the markets, it is necessary to take a look at the price of gold, the safe-haven asset par excellence.

Gold is not correlated to the markets

Gold stands idly by, and while waiting for the pronouncements of all the central banks in the leading markets of the planet regarding interest rates, it does its job very well, that of a safe haven asset as it is not correlated to the trend of the stock markets.

In periods like these, many investors, large or small, in order to protect themselves from the loss of value of fiat currencies and the crisis in the stock market, choose the evergreen precious metal by purchasing physical gold, but above all through funds, ETCs and ETFs, or through futures.

It is important to remember that gold is also very volatile, being a speculative asset (⅕ of the gold on the planet is held by central banks and ⅓ is managed by finance).

Its value, however, has always increased over the long term so it should be viewed in terms of protecting against risk and inflation rather than as a mere investment from which to make a profit.

The price of gold is the decline

Events that affect the price of gold

The noble metal is slightly down in Asian markets on Wednesday and suffering from tensions related to the Ukraine situation.

The United States have put about 8,500 soldiers ready for action in case of interference in Ukrainian territory by the Russians (a military invasion is thought) and this does not help to calm the “spirits” of politicians, citizens and investors. In this context, Europe together with the United Kingdom is thinking of sanctions if things should get out of hand in Donbas.

Risk appetite depends a lot on the situation of stability or instability, including geopolitical instability.

Also of great importance are the choices that the Fed will make, which seems to be oriented towards a rate correction policy that is causing great concern and apprehension. Previously it was thought that four variations were necessary, but there are those who are betting on a more aggressive policy that foresees even seven variations during the year. Tapering should also be kept an eye on, all actions that should start next March.

Also highly anticipated are the decisions that will be taken by the South African Reserve Bank and the Reserve Bank of Australia as central banks of countries with large gold deposits.

Gold confirms itself as a safe haven asset

Gold, which historically has performed better than the stock market in periods of volatility, should the expectations regarding the choices of the American Central Bank be confirmed, will still be the main safe haven asset (even if there are others) to compensate for inflation and an eventual but increasingly likely market crisis.

Further proof of this can be found in the statements to Reuters by UBS analyst Giovanni Staunovo:

“Despite the Fed likely set to announce the start of a U.S. rate hike cycle this week, gold keeps holding up well. Support for the yellow metal comes from high inflation and elevated market volatility”.

Widening the horizon to the other precious metals, silver is performing steadily while platinum and palladium are growing between 1 and 3%.

The post Gold down, but remains a safe haven asset appeared first on cryptodailynews24.com.