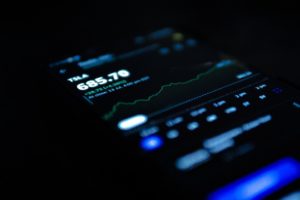 In a very complex picture that sees the Fed planning gradual but decisive tightening of monetary policy with the yields of US two-year bonds at highs comes the data on GDP.

Futures forecast a rising NASDAQ while the S&P 500 and especially the Dow Jones are down.

Yesterday Tesla (TSLA) has recorded a -11,55% in closing, the stock is in loss of 23% since the beginning of the year and to this must be added the difficulty in the supply of raw materials.

The “clinical” picture looks bad for Elon Musk’s company, yet the bullish projections on deliveries, the +760% of profits in Q4 and the 65% increase in net revenues bode well for the future.

“We won’t be introducing any new vehicle models this year, it wouldn’t make sense because there will still be component limitations”.

But he also added that the Cybertruck, Semi and Roadster models will be introduced within 24 months. The company aims to sell 50% more vehicles in 2022 or as many as 1.4 million cars.

Apple’s stock is generating a lot of expectation

Apple, the other highly anticipated Wall Street giant (AAPL) is grappling with its highest quarterly earnings ever ($123.9 billion) confirming analysts’ expectations. Revenue was up 11% year-over-year compared to estimates that put it lower (fourth quarter revenue of $83.4 billion).

The apple giant became the leader of the Chinese market with a 23% share of the market in December and has not happened since 2015.

Sales amounted to $104.43 billion equal to 84.3% of total revenues and up 9.2% while services grew about 24% to $19.52 billion; the only sore point was the Japanese market which saw revenues slightly down.

For analysts, despite the Nasdaq wobbling, it is a buy as a defensive stock and it is expected to grow this year thanks to the release of two new smartphones (SE3 and 14).

Great news for those who already had the stock as on 10 February a dividend of $0.22 per share will be paid.

Disney (DIS), as a result of the crisis in the film industry and the limited range of products (films, series and documentaries) compared to its competitors (which do have their problems) has lost 21% in the last 12 months and 12.74% in the last month alone. Despite this, the company enjoys solid foundations and in the last session recorded a +1.36% to $135.42 strong due to the increase in the number of subscriptions that record a gain of 8.28 million users.

The debacle of Shopify Inc. (SHOP) closes out the ugly picture outlined.

The Ottawa-based Canadian company does worse than any other e-commerce company – 40% at one month and – 30% at one year versus – 13% for Amazon for the same period.